A Great Night to Top Off the Sala Super League 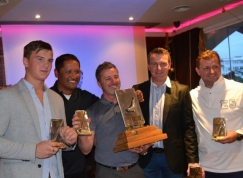 The Sala Super League golf tournament drew to a close with a fantastic presentation night at the Puerto Banus eatery.

Organisers welcomed former US Open Champion Michael Campbell to present the prizes to the teams that had battled throughout the year to claim the title. With the total of the best six rounds counting, it was a close run affair with the title claimed by the Centurion Group just three points ahead of Weapons of Grass Destruction with Enterprise Unit 4+2 in third.

The winner of the individual men's competition was Scott Sallis with Linda Martin taking the ladies' prize.

The fun event also had a serious aim with thousands raised for the DEBRA Butterfly Children charity. On the night, Campbell led the way by dipping into his own pocket and pledging €1,000, encouraging others to do the same. The generous gesture helped raise an extra €3,500 for the charity that helps pay for the care of children with EB, a rare and painful skin condition that leaves them with open sores over their bodies.

Campbell, who won the US Open in 2005, said that he remembered what his mother taught him as a boy. "She said you have two hands, with the left you receive, and with the right you give back. I have been lucky enough to receive plenty over the years, so it is right that I should give something back."