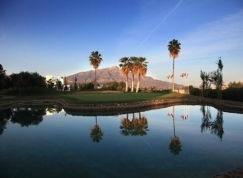 The tournament will be played September 15-18 with the sponsorship of Turismo de la Costa del Sol, who have committed to the event until 2012 with the option to continue between 2013 and 2015.

The selection of La Quinta Golf & Country Club, an internationally recognised golf venue, comes with the announcement that the event will continue to be played on the Costa del Sol, one of the most important tourism destinations in Europe. The Spain Ladies Open  will be the 20th event played on the 2011 Ladies European Tour calendar and will be the third of the year in Spain, following the European Nations Cu p at La Sella and the Tenerife Ladies Match Play, taking place from June 10-12 at Golf Las Américas, highlighting the importance of Spain on the LET schedule. La Quinta Golf & Country Club will host the Spain Ladies Open for the first time in the event’s history, with the support of the Real Federación Española de Golf and the Real Federación Andaluza de Golf.

A total field of 126 players including 120 professionals and six amateurs will compete for the title over four rounds, with a cut to the leading 60 professionals and those tied at halfway. The legendary Laura Davies added her name to the champions' list when she earned a two stroke victory at nearby Flamingos Golf in 2010.