Kim to be Golf Ambassador 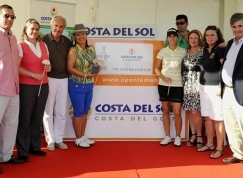 
¨You got some of the most incredible food; the culture is fantastic; lots of incredible red wine and beautiful men"

The two-time Solheim Cup player was presented with a replica sculpture of a bird by Picasso as a gift, by Francisco Amoros, director of the Costa del Sol tourist board, to mark the occasion following second round play at the spectacular Flamingos Golf Course last weekend.

Kim played on the victorious 2005 US Solheim Cup side at Crooked Stick in Indiana and then again at Rich Harvest Farms in Illinois in 2009. The energetic and competitive 26-year-old from San José, California, has a 5-2-1 win-lose-draw overall record having scored 5 ½ points and earned the final point to clinch the Cup for the U.S. Team in 2009.

Alicia Garrido Villacieros from Deporte & Business, the Promoter of the Open de España Femenino, is involved in preparing the Solheim Cup bid submission and she explained: “I think it’s very important to show the American people that Costa del Sol is a good place to come and I think Christina Kim is a fantastic ambassador for that.”

Kim is known as a spark plug for the US team and is never afraid to show emotion on the course in the biennial transatlantic women’s match play golf tournament. As well as being a member of the LPGA, she joined the Ladies European Tour last year and was delighted to be in southern Spain for the first time at the 2010 Open de España Femenino.

She said: “There are so many golf courses between here and the Andalusia area. It’s just absolutely stunning. I think it would be a great place to have a Solheim Cup, however I will say that whenever you think of Solheim Cup in Europe you think of clouds, rain and wind in either the UK or somewhere in Scandinavia, so I would not be upset if I was here in 2015 at all.”

She added that she would be reporting back on her first experience of Spain to potential US Solheim Cup team members. “I’ll just be telling them that they’ve got some of the most incredible food; the culture is fantastic; lots of incredible red wine, beautiful men, accommodations are spectacular, great golf courses and very passionate people. It really epitomises what The Solheim Cup is about,” she said.