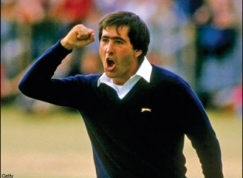 
Spain's most famous golfer passed away at home this morning.

Five-times major winner Seve Ballesteros has died at the age of 54, his family announced on Saturday. The Spanish golfer had struggled with his health since late 2008 when he was diagnosed as having a brain tumour.

"At 0210 (0010 GMT) Seve Ballesteros passed away peacefully surrounded by his family at his home in Pedrena," the statement on www.seveballesteros.com said.


Seve Ballesteros, regarded by many as golf's greatest shot-maker, was one of the most gifted and charismatic players to have graced the game and  thrilled fans across the globe with his swashbuckling style, magical touch around the green, creativity and passion for the sport.


British golf fans had taken him to their hearts after a brilliant swashbuckling display at Royal Birkdale during the 1976 British Open that nearly earned him the Claret Jug at the tender age of 19.

The Spanish Open honoured Seve with a minute's silence on Saturday, while many of those competing took to the course wearing black ribbons to mark the death of the five-times major winner. The flags at the course were flying at half-mast, while Jose Maria Olazabal and Miguel Angel Jimenez embraced on the practice range at the start of the day as they remembered their friend and fellow Spaniard.

The final cause of death was respiratory problems, the statement added.

Ballesteros piled up 87 titles worldwide, 50 of them on the European Tour, and his sublime golf skills were more than a match for his erratic driving while in his pomp.

A winner of three British Opens and two Masters titles, he gave the European game a much-needed lift in the late 1970s. Along with Briton Tony Jacklin, he was chiefly responsible for reviving Europe's fortunes in the Ryder Cup team competition and he was an inspirational Ryder Cup Captain at Valderamma in 1997

But his talent transcended golf, and his impact on the European golfing scene was huge. His funeral will be held on Wednesday.