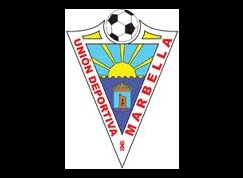 
UD Marbella made a bad start to the season

Recently relegated UD Marbella made a disasterous start to their season, losing 4 - 2 to Ronda in a match that saw them finish with 10 men as captain Dani was sent off. Marbella, who two seasons ago were challenging for promotion to the Second division were clearly not comfortable playing in Tercera División Grupo IX although they did score first. Only 3 minutes into the game David Perez Guzman scored from the penalty spot. Ronda scored from the spot 15 minutes later and Murcia made it 2-1 to the home side with a poweful header.

Sixty seconds later  came the goal of the match. Ronda's goalkeeper Lolo Soler kicked off and the ball flew 90 meters up the pitch. The bounce caught Marbella goalie Caros unaware and crossed the line. 3-1 and the second time the Ronda goalkeeper has scored this year!

Another penalty put Marbella back to 3 - 2 but when Marbella captain Dani hauled down a Ronda player in the area, Calderon stepped up to make it 4-2 to Ronda.