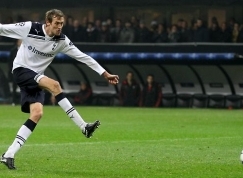 Peter Crouch scored in the 80th minute after Aaron Lennon dashed through the defense on a counterattack for a 1-0 first leg win at AC Milan in the second round on Tuesday night.

"When I beat the first defender and saw Crouchy was free, I was always going to put it across to him," Lennon said.

Crouch's goal was his sixth in eight European games this season.

"I thought we limited them to not many chances and I think we were the better side," Crouch said. "It's a fantastic achievement."

Zlatan Ibrahimovic thought he scored to tie it in injury time, but his overhead kick was ruled out for a two-handed push into the back of Spurs captain Michael Dawson.

A heated second half ended at San Siro with Milan midfielder Gennaro Gattuso charging toward the Tottenham bench and headbutting assistant coach Joe Jordan. Gattuso was involved in an earlier altercation.

"They lost their heads a bit at the end," Spurs manager Harry Redknapp said, also referring to a diving tackle by Mathieu Flamini on Vedran Corluka that led to the Tottenham player being stretchered off.

"How has he not got a red card for that?" Redknapp said of Flamini. "It's an absolute disgrace."

Milan goalkeeper Christian Abbiati had a busy first 15 minutes, then was taken off on a stretcher on the 18th after colliding with Crouch. Abbiati was replaced by Marco Amelia.

"He banged his head and went off with dizziness," Milan coach Massimo Allegri said. "We need him to be checked by the doctors, but he should be OK."