The World Cup is coming to a town near you! 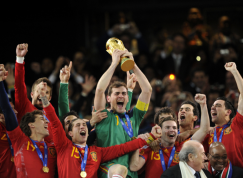 
The Football World Cup won by the Spanish team on July 11, 2010 in South Africa will begin a four-day trip to different municipalities of the province of Malaga thanks to an agreement between the Provincial de Málaga and the Royal Spanish Football Federation (RFEF).

Between 27th and 30th November, seven municipalities, Alhaurin de la Torre, Alhaurin el Grande, Cártama, Archidona, Ronda, Marbella and Fuengirola, will have the trophy on display for people to take a closer look at the Cup, won for the first time by the Spanish team that was coached by Vicente del Bosque. It is expected that thousands of fans will turn out and take the opportunity to be photographed with the trophy for public display in the designated time for each of the sites. The route will start on 27th in Alhaurin de la Torre, where it will remain all day. After this visit, next on  schedule is Cártama, and Alhaurin el Grande on the 28th.The Cup then travels to Archidona  on the 29th,  while the tour ends in the coastal municipalities of Estepona and Fuengirola on the 30th of November.

This is the third time that the trophy has visited the province of Malaga, although on the two previous occasions it stayed solely in the capital. The first time was in November 2010, when it was  on display for two days  at City Hall in the tour organised by the Andalusian Federation of Football. The second opportunity was more recently, on October 16th, in the Rector of the University of Malaga.The president of the council of Malaga, Elijah Bendodo, thanked the RFEF and the Andalusian Federation of Football "for bringing the Cup back to Malaga, for residents of the province to have the opportunity to be near her".

Where can you watch World Cup Games in Marbella?