Spanish football strike is over 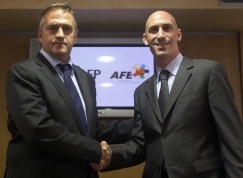 
The Liga kicks off this Friday after agreement was reached on wages.

Spanish league football kicks off this Friday after agreement was reached between the AFE Spanish Footballers Association and the Professional Football League, the LFP, which has ended the strike called on August 11 over the collective wages agreement and back pay owed to players.

The total debt to more than 200 footballers amounts to 50 million €.

Thursday’s announcement that the strike was over came after a four hour meeting between the two bodies on Thursday, the seventh to date, which agreed to create a new fund to guarantee payment to the players.

Agreement was also reached on allowing players to be released from their contracts if they have been unpaid for three months, and on guaranteeing wages to players whose club has been relegated.

Second Division matches start on Friday and for the First Division on Saturday. Matches which were postponed from the first round are to be played in January.