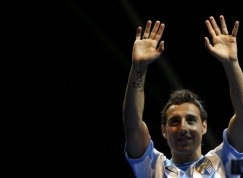 
Valencia hold on to the top spot.

Barcelona escaped with a point from Valencia on Wednesday night after a 2-2 draw in a game where Valencia were the better side in the first half. It was Mathieu for Valencia who bothered the three Barça defenders, and even Messi looked tired.

Pep Guardiola said after the game that it was ‘a just result in a grand game’.

It means that Valencia hold on to the top spot in the league.

El Mundo described Real Madrid as having lead in their veins last night as it remained goalless against Racing. Real seemed powerless to score against one of the Primera Liga teams with the smallest budget. Speaking after the game, Iker Casillas said ‘the image we have given is not at the height of Real Madrid’.

Another good win for Málaga who have their player Santi Cazorla to thank again. He scored the only goal, and a spectacular one from a free kick, to defeat Athletic de Bilbao and give Málaga their third consecutive victory in what was an entertaining game.