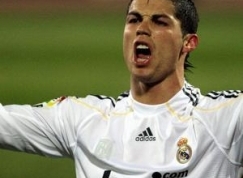 Ronaldo was sent off for the second team this season Source: abc

Real Madrid reached the halfway point of the season five points behind leaders Barcelona after beating Málaga 2-0 on Sunday evening. Cristiano Ronaldo was the hero and then the villain for Pellegrini's side, scoring his first two goals of the new year and then getting himself sent off in the second half after breaking Mtiglia's nose with a flying elbow. This was the second time that he has been shown the red card this season.

The Portuguese superstar finished off a rapid team move ten minutes before the break, and then struck a fierce volley wide of Munúa after Guti set him up soon afterwards. Before that however Duda's deflected shot had bounced off the crossbar, and Casillas had had a bit of work to do as well. Xabi Alonso and Granero could have increased the lead later on though, and Madrid cruised through to end the visitors' nine game unbeaten run and clock up their tenth consecutive home win in the league.

rainerhelin 07-02-2010 18:17 Who agree's when I say footballers are overpaid? What about doctors who save lives and teachers who educate the future generation. I don't see them earning millions...only people who run around kicking balls deserve 6 digits! Terrible!
0