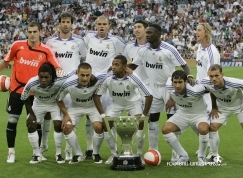 
The pressure has increased on manager Manuel Pellegrini after Real Madrid were thumped 4-0 in the Copa del Rey by lowly Alcorcon.

The pressure has increased on manager Manuel Pellegrini after Real Madrid were thumped 4-0 in the Copa del Rey by lowly Alcorcon. Alcorcon, whose stadium to the south of the capital holds less than 4,000 fans, play in the same league as Real Madrid's youth team Castilla.

But they were not overawed by taking on the Liga giants as they claimed a stunning 4-0 win in the first leg. A fired-up Alcorcon laid siege to the visitors' goal in the frantic early stages.

Former Real youth player Borja Gomez gave Alcorcon a shock lead in the 16th minute when he cut in from the right and curled a precise shot into the bottom left corner.

Ernesto Gomez made it three five minutes before the break, sidefooting home Diego Cascon's cross from the right, and Borja pounced on a loose ball to make it four in the 52nd minute.

Pellegrini replaced Raul with Ruud van Nistelrooy with just under 20 minutes left as Real searched desperately for a goal but Real were unable to find a goal ahead of the second leg at the Bernabeu in two weeks.

Real's city rivals Atletico Madrid sidestepped a banana skin with a 2-0 win at Marbella. Madrid’s “other” team easily beat Marbella, in front of a disappointingly small crowd. The high ticket prices (from €40 - €80) were blamed and TV images of builders still working on the stadium didn't do Marbella any PR favours either