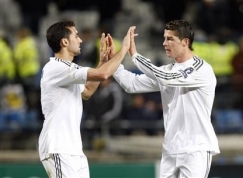 A Cristiano Ronaldo double earned Real Madrid a clinical 3-1 win at Olympique Marseille on Tuesday and a place in the Champions League last 16 as Group C winners. The Portugal forward fired a superb free kick in the fifth minute and benefited from a defensive blunder to score his team's third with 10 minutes left on a cold, windy night at the Stade Velodrome.

Lucho Gonzalez, who missed a second-half penalty, had levelled in the 11th minute, only for Raul Albiol to give Real the edge on the hour. Real, who have 13 points from six matches, will be joined in the next phase by AC Milan, who drew 1-1 at FC Zurich in the other Group C match, while Marseille will play in the Europa League last 32.

"It was a tough game but we knew what to expect. We perfectly dealt with this game to qualify. We were solid, we controlled the game," Real coach Manuel Pellegrini told reporters.

Marseille coach Didier Deschamps was left to ponder what might have been if Lucho had scored the penalty.
"There were still 20 minutes left, maybe it would have been different if we had scored that penalty. But let's be realistic, there is still a big difference between Marseille and Real Madrid," he told reporters