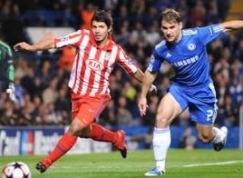 Atletico had a deserved draw with Chelsea


Real take a step closer to the last 16, while Atletico bow out

Draws for both Spanish sides on Tuesday evening, but whereas Real Madrid's point at AC Milan took them a step closer to the last sixteen, Atlético's against Chelsea was not enough to avoid them being knocked out of the competition.

After losing their last Champions League game at home to AC Milan, Real Madrid needed a result to get their campaign back on track. And Benzema got them off to a good start, turning the ball past Dida from a wide angle on the half hour mark after the keeper could only push Kaká's deflected shot in to his path. Five minutes later however the Italians were awarded a rigorous penalty after the ball hit Pepe on the arm inside the area, and old enemy Ronaldinho stepped up to fire the spot kick in to the top corner of the net.

It was last chance saloon for Atlético Madrid against Chelsea after the Spanish side had only picked up one point from their previous three games, but although the 2-2 draw was a marked improvement, it was too little to keep them in the running for a place in the next round. Second half substitute Agüero broke the ice with a spectacular first time volley midway through the second half, but Drogba scored twice in the last ten minutes to turn the scoreline around. Agüero equalised in injury time with a well-struck free kick, but with Porto winning in Cyprus, Atlético can now only aspire to third spot and a place in the Europa League.