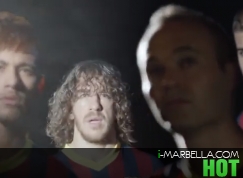 Barcelona footballers have taken up rather less orthodox positions for a new ad campaign. And now the Qatar Airways commercial becomes most watched FC Barcelona video of all time on YouTube.

Lionel Messi, Neymar and Sergio Busquets are just some of the football stars involved in life on ‘Barca Island’, which is shaped like the club crest. The Qatar Airways campaign video features Gerard Pique as a customs officer and Andres Iniesta as a painter. There’s even a cameo for former Barca and England star Gary Lineker as a taxi driver.

The English version has been viewed over 2.8 times, and added to the views of the Catalan version (2.2 million) the video has been seen over five million times.