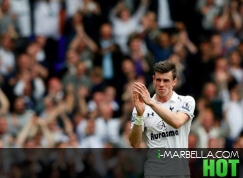 
Gareth Bale landed in Marbella Spain today to prepare for the deal with Real Madrid – but Tottenham and the Spanish giants are still thrashing out the terms of the proposed world record move.

The 24-year-old Bale flew to Malaga in a private jet and then travelled by taxi to Marbella, where he is expected to stay while negotiations conclude, last-minute hitches permitting.It is understood Real have tabled two separate offers for Bale, one of €100 million involving a series of payments over three to four years, the other a one-off up-front payment of around £70m. A player could also be thrown in as a makeweight in the second deal.

Spurs are believed to have concerns over the schedule of payments for the larger amount but if they can be assuaged, Bale is expect to complete his move and be presented as Real Madrid player at the Bernabeu Stadium on Tuesday.Tottenham have attempted to persuade Bale to stay, and offered to smash their wage structure and off him a club record £200,000 per week new deal to stay.But the winger is determined to move and become a Champions League contender. If the two clubs agree the £86m deal, Bale’s transfer fee will be the biggest ever paid in football history, topping the £80m Real paid to Manchester United for Cristiano Ronaldo in 2009.

Real Madrid are playing on Monday night against Granada in La Liga and no presentation of Bale is expected before Tuesday.Bale, who joined Spurs in a £10m deal from Southampton in 2007, was named as the player of the year by both the Professional Footballers’ Association and Football Writers last season after scoring 26 goals for the White Hart Lane side.