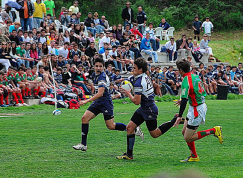 The families of the club members are personally helping to overcome the problems of finding sponsors by accommodating visiting club players in their own homes.

The club has prepared its most ambitious and global calendar to date for 2013, with the celebration of the Spanish National Championship 2013 under 16 category on the 18th and 19th of May. The campus, given by The London Wasps RUFC and The London Wasps Academy, one of London’s most important clubs at Easter and the celebrations of the I Rock & Rugby Festival of Marbella in April.

The Marbella Rugby Club, which next year celebrates its 25th Anniversary, has become a phenomenon as regards as training and teaching, team spirit and the internationalisation of the sport at a time of spectacular growth of rugby in Spain.   Marbella Rugby Club, which has had some 2,500 federated players pass through its ranks, has for the last 10 years been the source of first class players for top teams both at home and abroad.

Each year approximately 5% of the players formed and prepared in the ranks of the Marbella Rugby Club end up playing for these teams. This is a remarkable achievement, in particular as Marbella does not have a university and this is a sport traditionally associated with universities. The inventors of rugby were in fact university players from all over the world, in particular the British, French, Argentines and of course the Spanish that came to Marbella more than two decades ago.

The Marbella Rugby Club is also linked to Gastronomy. The club president, Paco García is Director of the Michelin starred restaurant “El Lago” and one of the most prominent ideologists behind the “haute cuisine” from Andalusia. Paco García still plays rugby in the category of veteran. Spanish celebrity TV chef Alberto Chicote also refers to the spirit of the sport from his time spent playing rugby and uses this as an example in his coaching techniques for restaurants. For more information please visit www.marbellarugbyclub.com

Marbella is not a capital provincial city, nor does it have a university. However one of its sports clubs, The Marbella Rugby Club, is the source of many of the national and international rugby club players; The Club is also host to many of the most important professional teams such as The London Wasps, one of the greats in the English Premier League. The practice of rugby in Marbella has become a phenomenon. The school is always amongst the top 3 in Spain. The boom of rugby in Marbella coincides with the growth and relevance of the sport in Spain. Important companies such as Orange or Heineken are placing a lot of effort into professionalising the sport in our country.

“We are extremely proud of the achievements we have gained and where we have situated The Marbella Rugby Club in these last 25 years, through hard work, dedication and passion for this sport. Personally I feel that rugby is of great value in these times, demonstrating many of the values needed by society as a whole. Rugby is a personal passion and our successes at all levels are a trophy to the perseverance and implication of each and every one of the members throughout the clubs history”says the club President, Paco García, better known for being Director of  “El Lago” one of the most emblematic Michelin starred restaurants in Spain, renowned for its “haute cuisine’.

An example of the fortitude of The Marbella Rugby Club is the presentation of the most ambitious and international calendar of its history, with three major events planned during the first quarter.

Spanish Championship 2013, Under 16 Category on the 18th and 19th of May, which will convert Marbella into the capital of Spanish rugby during the 3rd weekend of May, with attendance of many visitors and media from all over Spain.

The celebration of the “I Rock & Rugby Festival, Marbella” on Saturday 20th April, where the ambiance of union and friendship joins with the best rock music on the Costa del Sol

The Marbella Rugby Club has proved to be a leader and very resilient when it comes to the financial crisis and the lack of sponsors. This is highlighted by families of the club members, who provide accommodation for the players of visiting teams in their own homes. “The enormous friendship and team spirit that is present in The Marbella Rugby Club is a sign of identity and a club philosophy, which helps us to overcome the lack of sponsors with acts such as hosting the visiting team members at the homes of players and family. However we are looking to attract more economic support so as to maintain and stimulate the international growth of our club” states the Marbella Rugby Club Vice President Rubén Pérez Cano.

Another away victory for Marbella (4)