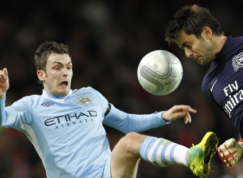 
(CNN) - The vast sums of money made by football's middle men continues to soar, with English Premier League clubs this week detailing huge amounts paid to agents for helping to seal multi-million-dollar deals during the last 12 months.

Big-spending table-toppers Manchester City predictably had the highest outlay, paying agents to the tune of $15.2 million between October 1, 2010 and September 30, 2011 for aiding the transfer of players such as Sergio Aguero, Samir Nasri and Edin Dzeko. Immediately behind City were Tottenham Hotspur ($12 million) and Liverpool ($11 million).

These figures beg the question, what do England's biggest clubs gain from the use of agents and why are the payments made to them so large? The total £71.87 million ($112.8 million) spent in that period is a rise of almost $7.5 million. "It's very hard to know, to be honest -- clubs need to give us some answers," World Soccer Magazine editor Gavin Hamilton told CNN. "There's no reason that they should be that high, because most of those clubs have very good scouting networks."

Hamilton believes that with clubs now possessing wide-ranging global scouting networks, the need to pay such large sums to agents should be lessened. "They discover and scout players themselves, and the clubs that aren't scouting players are relying on agents. They don't need to be doing that. They've got their own scouting network," he said.

With agents primarily employed to negotiate deals on behalf of players with their respective clubs, Hamilton argues it is the footballers themselves who should foot the bill for their services. "It's the player that hires the agent to secure them a transfer, a new contract, so the players really should be paying the fees," he said. "It's a big surprise to me that clubs continue to cover agents' fees, rather than insist the players, who are so well paid, reward their agents for the work they've done."

While the spending on agents could be considered as an unnecessary expense, Hamilton praised England's top division for showing the sort of transparency lacking in other top European leagues.

Hamilton also outlined the danger of having agents who represent managers and players employed by the same club, such as when manager Mark Hughes and Argentina striker Carlos Tevez were both at Manchester City while being represented by Israeli Kia Joorabchian. "I think certain clubs rely on particular agents who are not just representing players, but also representing managers," he said. "Managers now have agents. The Sunderland appointment, replacing Steve Bruce, there are a number of managers in the frame for the job who are with agents who also have high-profile players. There's a clear conflict of interest there and clubs tend to rely on managers who share an agent with players, and I think that is a dangerous situation to get into."

Hamilton wants stronger regulations placed upon agents, and hopes that financial fair-play regulations set to be introduced by European football's governing body UEFA will help improve the situation. The new rules are aiming at preventing clubs across Europe spending beyond their means in pursuit of on-field success.

"It's the nature of the modern game at the moment, it's unregulated and the money is going out of the game into the bank accounts of agents," Hamilton said. "I think over the next few years we are going to see more regulation with UEFA's financial fair play. What they're trying to do with financial fair play is have a system in place where clubs regulate their own spending, and clubs are aware that they can't just be throwing money at players and wages. I think UEFA are moving in the right direction, but it's the clubs who have got take up the initiative. There will always be agents around trying to take money out of the game."