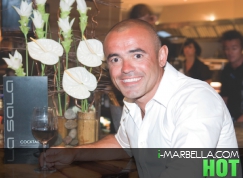 The Dublin born footballer filmed the latest episode of the popular show, The Fantasy Football Club at Sala Group’s flagship restaurant, La Sala in Puerto Banus. “La Sala is such a big part of my life now, it was brilliant to be able to combine it with my first love, football,” explained Stephen.

Well known figures including ShayGiven, Sol Campbell, Teddy Sheringham and Alan Shearer all made Carr’s cut. “It wasn’t easy to pick and choose,” revealed Stephen, “there are so many great players I could’ve picked three teams! I would’ve loved to have included, Robbie Keane, Les Ferdinand, Ben Foster and Nicky Butt!”

When asked who was his easiest choice Carr replied, “Ledley King, David Ginola and Alan Shearer, they were all dead certs.”

Carr moved his family to Spain following his retirement last May to focus his time on La Sala and its’ expansion into the UK.

Since its inauguration in 2010, La Sala has welcomed endless members of the Premier League including Arsenal and England’s Alex Oxlade-Chamberlain and Chelsea’s Ashley Cole, as well as numerous other famous faces such as Ne-Yo, Prince Albert of Monaco, Bruce Forsyth, Frank Bruno, Eddie Jordan, Freddie Ljungberg, Lord Alan Sugar, Jamie Oliver and Kym Marsh. Negotiations are well under way for the first La Sala UK venues to open in the South of England later this year.