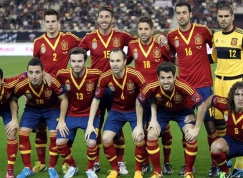 Despite winning their last three major tournaments, Spain are only the fourth favourites to leave Brazil with the World Cup this summer.

The host nation is understandably being pegged as the favourites, but with the expectation of the country weighing on their shoulders there is much pressure on Luiz Scolari’s young Brazil side.

But Spain boss Vincente del Bosque and his team might be slightly bemused at being placed behind both Argentina and Germany, given they head to the tournament with much the same team that won the European Championship in 2008 and 2012, plus the World Cup in 2010.

They are 6/1 to win the tournament, kicking off on June 12, with Brazil at 3/1 and Argentina and Germany both at 5/1, according to Skybet. Meanwhile, Roy Hodgson’s England are looking good for an outside bet at 28/1, the tenth favourites to win. Del Bosque is yet to announce his 23-man squad for the tournament yet, as is Roy Hodgson.