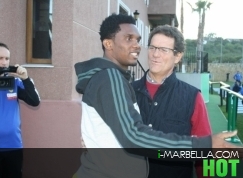 
Samuel Eto´o played in Marbella on the 25th of January and scored four goals in a friendly game.

Russian team FC Anzhi Makhachkala played a friendly game in Marbella and the hero was striker Samuel Eto'o, who has scored four goals in six of his team. The Russian team played against El Palo, a team from Malaga of La Liga Third Division of the Group IX.

The meeting was held on the 25th of January at "Marbella Football Center". The surprise guest in this party was the current Russian National Team coach, Italian Fabio Capello.