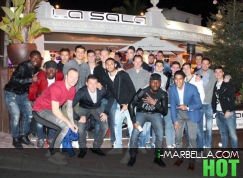 FC Basel is one of the most successful clubs in Swiss football, having won the Swiss Super League 17 times, only achieved once before in the history of any Swiss club. They have also successfully won the Swiss Cup 11 times. Last week, the renowned football club was spotted training at the Marbella Football Centre for the fifth consecutive season.

After a long week of training, the footballers only had one day to relax, so they chose the celebrity hot spot La Sala Puerto Banus to spend their Friday evening. Besides dining, they enjoyed the amazing Robbie Williams tribute by Ollie Hughes at the piano restaurant, and some of them even showed off their dance moves on the dance floor. "We love Marbella and the weather on Costa del Sol. It is really a pleasure to train here. If only we had more days of to enjoy it," the attacking midfielder Matias Delgado commented.

La Sala Restaurant has truly become the ultimate social and dining experience and is renowned as one of the busiest restaurants in Andalucía, an accolade successfully retained all year round not only during the traditional summer season. It's unparalleled formula has attracted a mass of international media and confirmed its position as Puerto Banus's premium hotspot thus welcoming celebrity figures and playing host to an array of television shows and documentaries broadcasted worldwide.

Who wants to be a Millionaire?