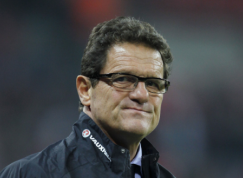 
England will fine-tune their preparations for Euro 2012 at a specialist training complex on the Costa del Sol ahead of their departure for Poland, with Fabio Capello determined to learn from the mistakes made before the team's disappointing showing at last year's World Cup finals.

Capello and his team will be based in Krakow for the duration of their stay at the European Championships but face a gruelling schedule at the tournament, with their group games to be played in the distant Ukrainian cities of Donetsk and Kiev. While the Italian insists the prospect of having to travel more than 4,000 miles in the group stage is not a concern, he wants to grant his players as much time off as possible at the end of the Premier League campaign before the squad travel to the Marbella Paradise of Football & Sports complex in La Quinta.

"We will go to Marbella for five or six days," said Capello, whose squad had trained at altitude in the Austrian town of Irdning ahead of the World Cup in South Africa. "I know the facilities there very well because it has been used by teams like Fiorentina and Bayern Munich for a long time. A lot of teams prepare there. I picked Austria last year because we needed to train at altitude. Now we need to find a warm place where we can work as a group and there are no problems for training."

A number of Premier League teams – including Everton, Newcastle and Aston Villa – have also used the facility, which has also hosted friendly matches for visiting sides. "There are three good training pitches [at MPFS] and, for that reason, I picked it," said Capello. "It's very nice. Now we just need to decide when we will go to Marbella before we leave to go to Poland and Ukraine for the tournament. But I want us to stay as a group for that period. I hope there will be more time to rest [than in 2010], and I hope the players all have time to recover their energies.

"The travel will not be a problem. The security we have [in Krakow] will be the same as in South Africa, but I know that people will only relax if we are winning. I saw what happened in New Zealand [with the England rugby union side] – a lot of 'relaxing'. If you are winning games, everything is perfect, everything is good. If you lose, people say everything is 'boring', the security [is too much], you're tired. Everything becomes a problem."

The fact that England avoided both the Netherlands and the Republic of Ireland in Friday's group draw in Kiev has served to crystalise the national team's friendly schedule next year, with the Dutch visiting Wembley on 29 February to play the fixture that was postponed in August as a result of the riots that were taking place in London at the time.

England will have two more friendlies, to be played at the end of May, with the Republic of Ireland hoping to persuade Uefa to permit them to welcome Capello's team for a first fixture at Lansdowne Road since 1995. The European game's governing body have previously stipulated that nations competing at Euro 2012 should not play each other within 30 days of the tournament's opening match. Should they be blocked from fulfilling fixture, the FA will seek alternative opponents.