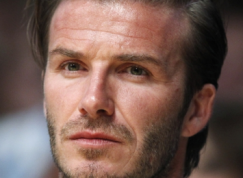 
David Beckham has retired from football, bringing to an end his career on the field.

Since his debut for Manchester United two decades ago, the 38-year-old has emerged as arguably the most iconic sportsman of his generation, captaining England, collecting 115 caps, and celebrated as a champion in four different countries - the only British footballer in history to do so.

Beckham has played his last game, despite the offer of an extended one-year deal at Paris Saint-German, leaving on a high note after helping Carlo Ancelotti's side win the French title for the first time in 19 years.

Confirming his announcement, Beckham said 'I'm thankful to PSG for giving me the opportunity to continue but I feel now is the right time to finish my career, playing at the highest level.'