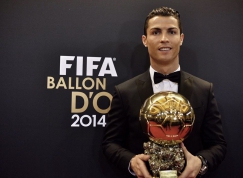 Cristiano Ronaldo shut out Lionel Messi for the second straight year in the battle for the Ballon d'Or, and he is showing no sign of giving up his grip as king of world football.

The 29-year-old Portuguese forward has been at the height of his powers again this year, terrorising opposing defences in the Champions League and Spain's La Liga.

He is also hungry for more. Asked at the Ballon d'Or ceremony what his favourite goal had been, Ronaldo was only half-joking when he said: "For me, the next goal is always the most important."

Despite a patellar tendinosis problem in his left knee that contributed to an underwhelming World Cup, the Portugal captain was clearly a deserving winner of a third Ballon d'Or in a year in which he guided Real Madrid to their 10th Champions League title (but first in 12 years) and continued to rewrite the history books.

That night in Lisbon on May 24th illustrated better than most the two sides of Ronaldo's character that has at times made him a divisive figure.

Battling through knee troubles and frustrated for over 90 minutes, Ronaldo and his Galactico team mates looked set for one of the most embarrassing defeats in Real's history as they trailed poorer city rivals Atletico Madrid until Sergio Ramos's towering header in stoppage time.

Further goals in extra time from Gareth Bale and Marcelo made the long-awaited La Decima, a tenth European Cup, secure in Lisbon. But it was not enough for Ronaldo who surged into the Atletico box and collapsed under the attentions of Gabi.

His moment had finally arrived in the homeland he left 11 years ago for Manchester United at a crucial crossroads on the road to being the world's best.

Inevitably he slammed the penalty home to take his record-breaking tally to 17 goals in a single Champions League season.

Yet, his outrageous show of vanity as he tore off his shirt and flexed his muscled torso was a reminder of why many had in the past preferred the more modest Messi.

The preening side of Ronaldo will always exist. His latest Ballon d'Or will likely take up residence in the museum he opened to honour himself in his home city of Funchal on the island of Madeira.

His story, though, is also one of a testament to extraordinary hard work and sacrifice. Ronaldo came from a poor background and many would say he has less natural talent than the elegant, diminutive Messi.

But Ronaldo has transformed himself from the skinny kid that arrived at Old Trafford into a physical specimen of the type football has rarely seen.

That physical transformation is a symbol of his desire to improve and raise the bar of achievement to a level previously thought impossible. When he scored his fourth hat-trick of the current campaign against Celta Vigo in December he moved through the double century mark for goals in La Liga in just 178 games.

His overall tally is a staggering 285 goals in 274 appearances for Madrid. It is no longer a question of whether Ronaldo will become their leading all time scorer, but when. Moreover, he is likely to pass Raul's record tally of 323 having played more than 400 fewer games.

There is more than goals to his game too. His wonderful reverse ball for James Rodriguez to open the scoring against Espanyol on Saturday took him joint top of the assist charts in La Liga too. As in the goal charts, Messi lurks behind in second.

The rivalry between the two has marked an era unlike any other. Maradona, Pele, Johan Cruyff, and Franz Beckenbauer never played in the same league, at the same time, for the two of the biggest sides in the world, judged head-to-head, week in, week out.

And for Ronaldo, the rivalry is certain to go on -- just look at the Ballon d'Or count: Messi has four to Ronaldo's three.