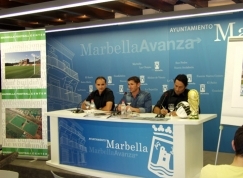 
The competition will take place on June 19

Marbella Councillor for Sports , Angel Mora, presented the Marbella Business Football Cup 2011 to be held on June 19 at Marbella Football Center and opened the application period for 20 teams.

Angel Mora stressed that this tournament, which has run since 2004 and is governed by the regulations of the Spanish Football Federation, is aimed at businesses and will be held in one of the best soccer facilities in Europe for natural grass  and where many teams come to train from around the world. "

The tournament officials explained that the tournament will be made up of  five groups of four teams each. The prize for the winners will be a replica of the World Cup for each player.