Malaga lose their 3rd place in the league 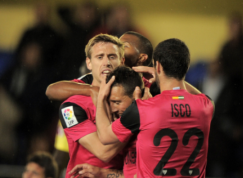 Malaga team has lost their 3rd place in the league after being beaten in Villarreal 2-1. Cazorla was the one who scored first for Málaga, but after that Senna equalised. Then during the extra time Hernán Pérez also found the net for Villarreal and they won 2-1. The result is a boost to Villarreal who face falling into the relegation zone.

Other results from last night: