Malaga F.C. wins a place in the UEFA Champions League! 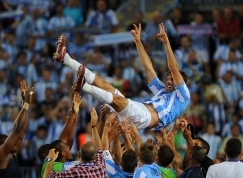 
The Blues and Whites played their biggest game in history on Sunday and won themselves a place among Europe's finest.

Malaga CF have achieved something that seemed impossible just a couple of seasons ago. On Sunday, in what has been described as their most important game ever, they beat Sporting one-nil to gain a coveted place in Europe’s Champions League. Expectations had been high all over the city and beyond throughout the weekend, starting with several thousand fans dressed in Malaga shirts descending onCalle Larios in response to a photo call sent out by SUR on Saturday. Meanwhile blue and white flags decorated lampposts and even the city’s buses to add to the pre-match atmosphere.

The team didn’t let their fans and their city down. The goalless first half heightened tension in La Rosaleda, as a draw would not be enough to gain a place in the Champions if Atlético won against Villarreal. Relief came soon after half time, however, when Rondón headed the ball into the back of the net from a corner taken by Cazorla. Euphoria took over the nearly 30,000 fans in La Rosaleda as well as the thousands more watching the match across the city and the Costa del Sol. Tension interrupted the celebrations once again though when Atlético scored in Villarreal; Malaga had to hold onto their lead whatever.

However the final whistle was not far off and La Rosaleda became one big party. The players returned to the pitch wearing T-shirts showing their appreciation to the fans, with Pellegrini and even Sheikh Al-Thani greeting the crowds. Celebrations then spread over into the city’s Paseo del Parque where the blue and white partying went on until the early hours.