England through to the last 16 in South Africa 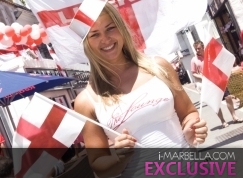 Tottenham's Jermain Defoe lifted English hearts with a magnificent goal in the 23rd minute something that Heskey has only achieved once in eight years....errr no brainer Fabio.

One would have to worry however that England still have not reached their true potential in this competition and indeed wonder if they actually will.

Fans at Lineker's in Puerto Banus were treated to a nail-biting finish to what I can only describe as a very poor 90 minutes. However England fan Steve from Essex told i-marbella he thought it was a much improved performance from the English squad and has the Slovenian Goalie as the hero of the day for the opposition whilst Milner was certainly man of the match.