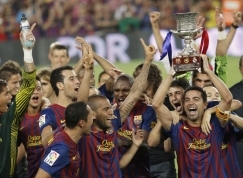 Barcelona's captain Xavi Hernandez (R) holds the trophy as he celebrates with teammates their victory against Real Madrid in their Spanish Supercup second leg soccer match at the Camp Nou stadium in Barcelona August 17 Source: Scanpix


An exciting game was diminished by events at the end both on and off the pitch.

Barcelona have won their first title of the season, the Supercup, with a 3-2 victory over Real Madrid at the Camp Nou on Wednesday night, following from the 2-2 draw at the Bernabéu in the first leg.

Real Madrid had high hopes and after the first leg appeared to be better prepared for the start of the season, but Barcelona have Messi, and he has spent the summer getting himself even fitter. He scored two of the goals, and set up Iniesta for the first one, in what was an exciting game where once again Real Madrid put on the pressure and were better prepared physically.

The Real equaliser goals came from Cristiano and Benzema. Unfortunately there was an incident at the end of the game after several players had been sent off, when the Real Madrid manager, José Mourinho, stuck his finger in Tito Vilanova’s eye.

A minute from the end Real Madrid’s Marcelo carried out a very harsh entry on Cesc Fábregas who was playing his first match for Barça. It was a direct red card. That caused the Barcelona bench to get to its feet, then the Real bench did the same and a period of pushing and shoving started. The Spanish press say it was a dreadful image of the Spanish game and distracted from the action on the pitch.

Then Özil was sent off for stepping on Fábregas when he was on the ground, and Villa was sent off for hitting the German in response. It was then that Mourinho took out his finger, and poked the eye of the Barça deputy manager, ‘Pito’ Vilanova.

Many Barça players have attacked Mourinho, Piqué said that he is destroying Spanish football, while Xavi declared ‘The image of Real Madrid is pathetic’ for going to the changing rooms during the cup ceremony. After the match Pep Guardiola admitted ‘Sincerely I did not expect us to be capable of winning the Supercopa against this Madrid’.