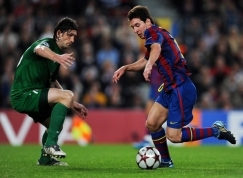 Barcelona had  to share the points this week after a 0-0 draw at Rubin Kazan. The Russian side had surprised Pep Guardiola's team in the Nou Camp a couple of weeks ago, and once again a well organised defence prevented the defending champions from scoring. Things could have been different had Ibrahimovic's shot gone in rather than bouncing away off the post in the third minute. But after that local keeper Rhyzikov was scarcely troubled, and Valdés had to make a couple of first class saves from bustling substitute Bukharov in the second half. Barcelona now need to win their last two games to be sure of going through.

Sevilla were also held to a 1-1 draw at home to Stuttgart, but after three wins in their previous games the point ensured them a place in the first knock out round. Jesús Navas opened the scoring with just under a quarter of an hour gone after running on to a pass from Luis Fabiano, and Negredo came close to a second before the break. The German side came back after the restart though, with Pogrebnyak in particular hitting the bar. Sevilla were left with ten men for the last quarter of an hour when substitute Duscher limped off with all three changes made, and the visitors took advantage to equalise through Kuzmanovic.