All Blacks hang on to win the rugby world cup 2011 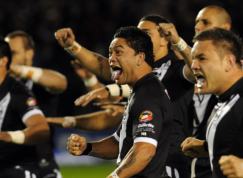 
New Zealand were crowned world champions for the first time in 24 years after squeezing past an inspired French team by just a single point.

An already pulsating atmosphere within the ground before the start had been stoked still further when France's players formed an arrow formation to face down the haka, and then advanced slowly over halfway as the capacity crowd roared.

Tony Woodcock's early try and a penalty from fourth-choice fly-half Stephen Donald were enough to see the All Blacks home in an extraordinary match that defied all pre-match predictions. France produced their best performance of the tournament and appeared to be close to pulling off one of the great upsets after captain Thierry Dusatoir's try with half an hour remaining set up a nerve-shredding finale. But Francois Trinh-Duc missed a long-range penalty before desperate defence saw the favourites hang on for a famous win.

The final whistle triggered scenes of wild jubilation at Eden Park as a nation celebrated a repeat of the outcome from the very first World Cup final in 1987. And when skipper Richie McCaw hoisted the Webb Ellis trophy high into the night, a quarter of a century of hurt was blown away in an explosion of fireworks and cheering.

Another away victory for Marbella (4)