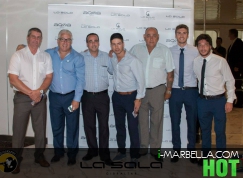 The Gibraltar Football Association (GFA) was formed as the Gibraltar Civilian Football Association in 1895, changing to its current name in later years. It is one of the oldest football associations in the world. From October 2012, the GFA were provisional members of UEFA and the Gibraltar national futsal team, under-19 and under-17 representative teams participated in the 2013/14 UEFA season competitions. At the XXXVII UEFA Congress held in London on 24 May 2013, Gibraltar was accepted as a full member of UEFA.

As to GibFootballTalk Awards 2014/15, 12 goals made the shortlist for this year's goal of the season contender.

he 142-metre yacht hotel comprises 189 lavishly appointed rooms together with banqueting suites, bars, cocktail lounge, tranquil pool, spa, and sundeck and soon it is also offering its guests the unique opportunity to enjoy the ultimate social and dining experience.

La Sala is renowned as one of the busiest restaurants, an accolade successfully retained all year round, not only during the traditional summer season. Its unparalleled formula has attracted a mass of international media and confirmed its position as premium hotspot, thus welcoming celebrity figures and playing host to an array of television shows and documentaries broadcasted worldwide.

For reservations, please mail at info@lasalagibraltar.com.

Win a Dinner for Four in La Sala Gibraltar