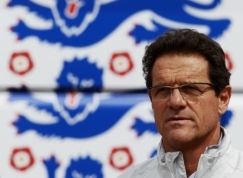 
Fabio Capello quits after the English Football Association decide to strip off John Terry's captaincy after he was charged with racially abusing Anton Ferdinand during a Premier League game in October earlier this Season.

Fabio Capello has presented his resignement as England's manager four months before the Euro 2012 in Ukraine and Poland, after a meeting with FA Chairman David Bernstein, and FA General Secretary Alex Horne. He has manifested that the John Terry episode has been crucial towards his decision, and literally stated on Italian press that "England's Federation has insulted me and undermined my authority".


Harry Redknapp leads the odds to be England's manager successor, however other names such as Stuart Pearce, Guus Hiddink, Roy Hodgson, and even Jose Mourinho have been mentioned as possibilities.