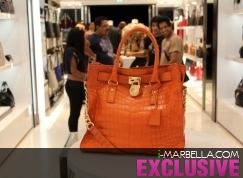 
Michael Kors opened its store in Puerto Banus this summer. MK handbags show an acute awareness of fashion as an art form. There was a lovely cocktail in the Puerto Banus' store and a raffle, where one of the guests won a glamorous bag by MK.

The American designer Michael Kors started designing clothes when he was just 19 and simultaneously studied fashion design skills at the prestigious Fashion Institute of Technology in New York. He launched his self designed Michael Kors womenswear line in 1981, after tremendous success of which, he was named as the first ever ready-to-wear designer for women and appointed as the creative director for a French fashion house. The eminent fashion mogul is married to Lance LePere since 2011, and the blessed couple stays in their plush home in New York.

Everybody wants to have MK bag these days and apparently Michael Kors is the online world's most sought-after US brand, according to Digital Luxury Group, an organisation that provides the luxury industry with market intelligence.