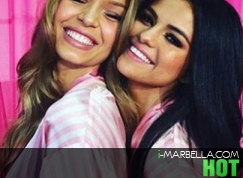 The Victoria's Secret Fashion Show took place in New York on November 10, 2015, with some of the most beautiful women in the world wearing glittery underwear and the famous Angel Wings.

Forbes has estimated that the 47 models hitting the catwalk make more than $50 million in combined paychecks annually.

Gigi Hadid and Kendall Jenner appeared on the catwalk for the first time, along with nine other newcomers.