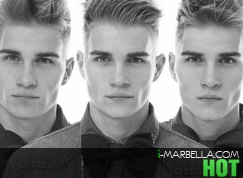 “We discovered them about a year ago, at one school’s fashion event where they were featured in. In the beginning I was looking like wow that is a cool guy and then another cool guy came, how can they change outfits so fast! But then in the end all three took the stage and it was an incredible effect indeed,” says Mikomägi in an Estonian national TV program on ETV called "Witness”.

The boys are currently studying in the 11th grade in Tallinn and the agency regards them as an extraordinary phenomenon. Living models has signed many twins, but they are the only triplets signed to the agency. Although they’re fairly new and fresh in the fashion world, there has been significant interest towards them already. For example, last weekend they were featured in a TV commercial that will be aired in America, and was filmed in Stockholm.

“There’s quite a lot of interest. One really strong male model agency in NYC is already interested in representing them. And of course we have been in Stockholm for shoots with them,” revealed Mikomägi.

Evelyn says the triplets are really serious and committed to this. “They have been very well raised, they have good manners and speak great English. Everybody who has met and worked with them, have nothing but good to say about the boys,” she adds.

See the interview with the triplets in Estonian HERE!