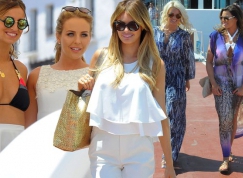 
An exotic and colourful mix of characters have been chosen to appear in a new reality TV show being filmed on the coast.

Dozens of local expats have been selected for programme Life on Marbs, which is filming for the next 12 weeks in Marbella, it can be revealed.

The cast includes Sarah Carter, the boss of Golden Tarts beauty salon, Lina Hodgkins, the manager of the Lineker Group, and a journalist and sales rep from Marbella Rocks magazine.

Made by the team behind UK hit show The Only Way is Essex (TOWIE), dozens of cameramen, producers, and scriptwriters have descended on the town.

At the bash, the good-looking cast mostly milled around, eating canapes, and drinking champagne, while waiting to be summoned for snippets of filming.

"The show is completely unscripted – unlike TOWIE – which means that anything could and probably will happen at any time," said one cast member.

So far, producers have chosen around two dozen people to star in the show split into two groups, group A and B, with the main characters in group A.

Another cast member said: "I am sad not to be in the first group but it’s all so exciting – there’s an amazing team and it should be a lot of fun."

The 12-part series, airing later this year, promises to feature cameo appearances from the TOWIE stars themselves.

Adapted from The Olive Press

Marbella benefits from the TOWIE effect