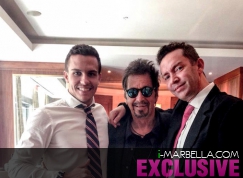 
Christian-Rex is the newest name In custom hand made designer jewellery, using the finest crystals & cutting edge designs. The company was one of the sponsors for the A Gift Lounge with Nkpr in Tiff14, Toronto Film Festival, where hundreds of celebrities were present.

Hundreds of celebrities, press, television, bloggers and all kind of medias attended the event in the A Gift Lounge at Toronto International Film Festival - Tiff14. Christian Rex’s friends, Hollywood actors Shemar Moore and Madeleine Stowe also came to see him there, even they where very busy attending all kinds of galas and press meetings. Among the celebrity guests were also singers Eleven past one, Jill Godin, Jesse Labell and many others.

On thee second day Christian-Rex and his crew also attended a vip party at the Pravda vodka House. It was organised to thank everyone for coming and to celebrate the great success and of course the party was absolutely amazing!

Christian Rex told i-Marbella the event was fabulous and during the film festival in Toronto he stayed in Ritz Carlton, which is the best hotel in Canada and it was also full of stars. Among the celebrities staying at the hotel were the amazing actors, Richard Gere and Al Pacino!

Al Pacino rocking the bracelet with Christian Rex and Jose

According to Christian Rex, Al Pacino was a really nice person and they had a lot of fun during his stay there. “He absolutely loved our bracelets as you can see on the photos and he was wearing them every day!” says Christian-Rex. “He stayed on the same floor as us in Ritz with his stunning girlfriend Hollywood actress Lucila Solar, so we met them everyday. She was also very lovely!”

During our stay the model and Christian’s business partner, Jose Garcia (instagram twitter @JoseGf13 ) was very busy talking to different media and press and also he has several photo shoots there. Jose is also the image of Christian-Rex. “I must say when I chose him I selected the right person for this job, since everybody loves him!” he adds.

Andrea Caron, Christian-Rex’s North American business partner was also present at the event. “She is she is very dynamic and can’t even sit still for a minute! That is so good for the company since she can move things forward in the right direction and fast!” says Christian-Rex.