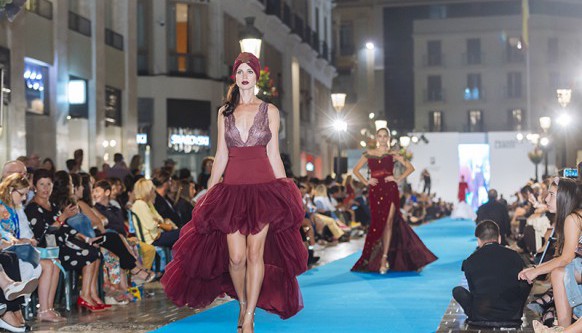 
The seventh edition of the event, which will take place on 15th and 16th September, gives the young designers' talents the necessary visibility in the Ribera del Duero competition.

Candidates must create their sketches inspired by Ribera del Duero wines before May 15 and send them to simona.monni@agenciayellow.es
The designs of the 20 selected will be seen in the 7th Larios Malaga Fashion Week, where the winner will be known.

In its commitment to support the young talents of the fashion world and thus demonstrate the proper health of this sector, Pasarela Larios Malaga Fashion Week and the Regulatory Council Denomination of Origin Ribera del Duero, organized for the second consecutive year the Ribera Awards Of Duero for Young Designers. This year, and as the main novelty, the contest expands its range of participation. Likewise, the Regulatory Council offers to the emerging artists of national scope the possibility of creating and making designs inspired by the wines of Ribera del Duero.

Participants have until May 15, 2017, to send the sketches of their creations to simona.monni@agenciayellow.es. The categories in which you can participate are a casual man, a party man, man bath, casual woman, female party, female wedding, woman bath, and accessories.

In addition to the design, they should provide a brief explanation (a word) about their creation and then make a letter that will be placed next to each mannequin. Finally, among all the candidates, the Regulatory Council of Ribera del Duero will select a total of 20 designs.
The costumes will be exhibited on September 15th and 16th in an exhibition booth created for the occasion and will also be paraded on the longest couture catwalk in Europe.
The dresses chosen for their creation and preparation will receive a monetary contribution for this purpose.

Coinciding with the closure of Pasarela Larios and as the final broker of the event, an expert jury formed by a renowned designer and a member of Ribera del Duero shall name the winner who will be chosen from the six finalists most voted in social networks.
This action is part of the initiative #EspirituRibera, through which Ribera del Duero wants to bet on the creativity of the young designers of our country and offer them the opportunity to make themselves known in one of the best Spanish platforms in the world of fashion: Larios Fashion Week in Málaga.

Likewise, the present public will be able to familiarize themselves with the wine world by participating in sensory tastings in which they will know the wines of Ribera del Duero in the most creative way: through painting and perfumes as well as tasting the reds and rosés of the area.

Footbridge Larios Málaga Fashion Week, with more than 300 meters in length, congregates more than 15,000 people every day. An event organized by Nueva Moda Producciones with the collaboration of the Ayuntamiento de Málaga and D.O. Ribera del Duero, which will once again turn Malaga into a point of reference for national and international fashion. In its VII edition, it has been positioned as a cultural and tourist event of the first level.