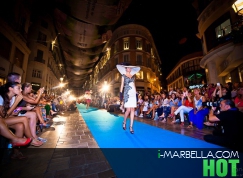 A magical evening filled with elegance took place on the most emblematic street of Málaga on Friday, presenting collections that contained an oriental influence and were a tribute to the femininity of women. Over 80 models walked the blue carpet, including Elisa Guahnich, Daniel Rivero, Marta Blanco, and Rubén López.

At the end of the parade, designer Rafael Urquízar received the “Alfiler de Oro” from the Mayor of Málaga in recognition of his significant achievements and contribution to the fashion industry.

Pasarela Larios Málaga Fashion Week, organised by NuevaModa Producciones, is a consolidated event maintaining the highest levels of quality and has benefited a variety of different sectors including: specialized companies, fashion, art, gastronomy, culture and tourism.

Once again, Málaga’s most emblematic street was spruced up on Saturday evening in order to entertain the latest designs for the autumn-winter season.

On this occasion, brands at the parade included: La Gioconda Novias and Fiesta, Gisela, El Corte Inglés (Emidio Tucci, Tintoretto, Elogy, Amitié and Síntesis), McGregor, Sena Design, Annette Dulon Fashion, Spagnolo, L ́Etude and Río de la Plata. The collections and their unique styles were a great success amongst members of the viewing public. La Gioconda Novias and Gisela brought a touch of romance to the evening with their dazzling bridal designs. They were followed by brands such as Emilio Tucci, Tintoretto, Elogy, Amitié and Síntesis, who took a more functional twist on fashion aimed at the young and trendy.

Sena Design, the German brand of kaftans along with Dulon Fashion designed by Annette Dulon brought a touch of international fashion to the evening. Spagnolo presented their autumn collection at Pasarela Larios Málaga Fashion Week 2014 with padded grey tones accompanied by umbrellas, L'Etude also presented their sophisticated garments whilst Rio de la Plata put the finishing touches to the end of this year’s fun and carefree parade.

At the end of the parade, acknowledgment was made to El Corte Inglés, one of the world's leading department stores. Eduardo Barrero, Head of External Relations at El Corte Inglés received the award on the stores behalf.

Having established itself as a first class cultural and touristic event, the fourth edition of Pasarela Larios Málaga Fashion Week, transformed the city of Málaga over a period of two days making the city a landmark for both national and international fashion. The event aims to support trade by providing a space in which designers are able to showcase the latest trends and developments in their collections.