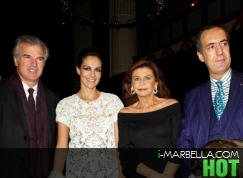 The butter-soft napa for which Loewe is famed is contrasted this season by the plentiful use of shearling, providing a rugged, tactile contrast that reveals the other side of the material (literally: napa is shaved shearling). Bohemian and aristocratic, it lines the saddles in the best horse-riding schools in Spain, is reminiscent of the rugs and throws found on hearthstones and beds in Spanish castles. Loewe’s signature bag, the Amazona, has been made in full shearling. Calf has been given both glossy smooth and textured-grain finishes, while the napa has also been embossed and rubberised to give it an edge as sharp as Bilbao’s architecture.

There are also influences in the collection from other parts of the country. A ceramic decorative tradition dating back to southern Spain in the 13th century in which tall vases and tiles were adorned with birds, shields and dragons are referenced in the prints – in particular, the tiles painted by the 19th-century Catalan artist Mariano Fortuny, whose ceramic blues and off-whites colour the collection. The silhouette comes from sportswear, with sweatshirt shapes giving an ease to tailoring and dresses. The colour palette has been carefully edited: jet black, off whites and bold red create a graphic effect.

This season also sees the introduction of a new bag, the Amaya. Inspired by another of Loewe’s most popular bags, the Flamenco, it takes a formal bag shape and softens it, realised in smooth calf, decorated with equestrian-style hardware in rich brass and finished with a chain that has been meticulously braided by hand.

LOEWE launches a special theme for the summer 2017