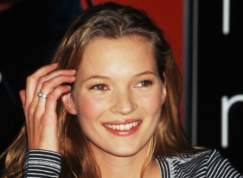 
There's no debate here, this supermodel has earned her nickname Kate the Great.

Moss, who started her career at 16 years old, has appeared on over 50 magazine covers and still manages to land modeling gigs for Longchamp, Valisere Lingerie, and YSL -- even after a major scandal in 2005. And the best-dressed woman of the decade still finds time for business ventures like her Topshop line and recording an album. (The latter is perhaps a rumor.)

Despite her Pete Doherty rocker phase and those frumpy festival looks, we're in awe of Moss' ability to spot a trend years before the masses.

We're taking a look back at her unwavering sense of style over the decades. To view more pictures click HERE!