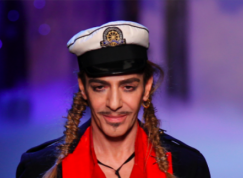 
Fashion label Dior has suspended its designer John Galliano after he was arrested for allegedly making anti-Semitic remarks to a couple and hurling abuse at them yesterday.

The fashion designer was questioned and escorted home by police in Paris after he allegedly hurled abuse at a couple who were seated on a cafe terrace in the French city's fashionable Marais district. Dior chief executive Sidney Toledano said in a statement today: "Dior affirms with the utmost conviction its policy of zero tolerance towards any anti-Semitic or racist words or behaviour.

Pending the results of the inquiry, Christian Dior has suspended John Galliano from his responsibilities.

However the 50-year-old designer - who is currently putting the final touches to his autumn-winter collections for Christian Dior and his own label for Paris Fashion Week next week - has denied he made anti-Semitic remarks.

His lawyer Stephane Zerbib said the designer "formally denies the accusations of anti-Semitism made against him."He added the sartorialist "is not at all in this state of mind (and) will explain later" and vowed "legal action will be taken against those making such accusations."Galliano took over the creative helm at Christian Dior in 1996 and one policeman surmised stress ahead of fashion week could be the cause of his alleged outburst.