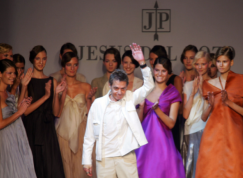 
The 64 year old had been ill for some time.

Spanish fashion designer, Jesús del Pozo, has died from emphysema at the age of 64. It seems his breathing problems had worsened and he entered into a coma on Friday, and died on Saturday.

He started his career in 1974 when he opened his first shop for male fashion in Madrid. He was known for strong designs and innovation in the use of the materials, with elegant lines which generally seduced the experts.

His absence will be noted in the next edition of the Cibeles Fashion Show, and already an event in his honour is being organised for September 16.