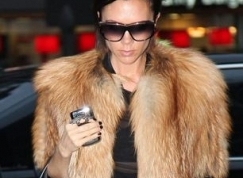 
Many claim they’d rather go naked than wear fur, but, as the winter chill sets in, stars everywhere have been stepping out in the next best thing.

In the past month alone, Kate Moss, Victoria Beckham, Kelly Rowland and Liz Hurley have all been spotted wearing cosy synthetic furs. Unsurprisingly, animal welfare group PETA are thrilled by the latest celebrity trend. ‘I urge everyone to embrace the faux-fur trend,' said a spokesperson for the campaign group.

Mrs Beckham who has been a long-time supporter of PETA, has pledged in the past 'never to work with fur in any of my own fashion collections'. Her support of the group could be in jeopardy however, as rumours emerged today that she is planning a fur-based collection with Marc Jacobs.