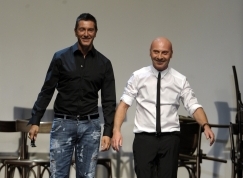 
Dolce & Gabbana have won a coveted award for their contribution to the city of Milan.

Much is made of "the American dream" but it's the Italian dream that designers Domenico Dolce and Stefano Gabbana are celebrating today, having been named recipients of the Ambrogino D'oro, an annual award presented to Milanese citizens who have made an outstanding contribution to the city.

As Italy's fashion capital, it's little wonder that the duo are being honoured for their impact upon Milan. "We are extremely honoured and excited to receive this award. Milan is not only our city and where our home is, but also the place that allowed us to make our dream come true," says Gabbana. "Milan has given us a lot and we cannot be but happy that our work contributed to its well-being."

The award is a well regarded one in Italy, having been presented to Milan's most distinguished for 45 years. Indeed, Gabbana admitted in an interview with WWD that as a primary school child, he believed that the Ambrogino D'oro was given to "heroes". It is named after Milan's patron saint, Saint Ambrogio, and is presented annually on 7 December - the same day the saint is celebrated.