Average handbag weighs as much as a toddler 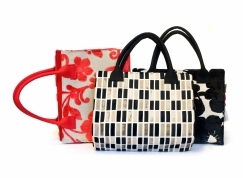 
According to a new survey, people consider so many items to be essential that the average handbag weighs the same as a 15-month-old toddler.

Researchers for OnePoll asked 5,000 people in Britain what they carried around with them and used their responses to calculate that the average bag weighs 10.5 kilograms (23lbs).

A mobile phone was the most popular item with 85% of women and 43% of men saying they kept a phone in their bag. Keys, pens, tissues, headache tablets, chewing gum, MP3 players, lip balm, a mirror and deodorant were also essential items to carry around, according to many of those questioned. Some people even said they routinely carried a toothbrush, condoms, a bottle opener and a sewing kit.

One in 20 men (6%) carry spare underwear, twice the number of women who pack an extra pair of knickers in their handbag. Men were also more likely than women to carry their pet dog around in a bag. One in 20 men (5%) said they had a dog carrier, compared with just one in every 100 women (1%).

The What's In My Handbag? survey, commissioned by WindSetlers Gel Capsules, found 15% of women and 10% of men routinely carry an indigestion remedy.