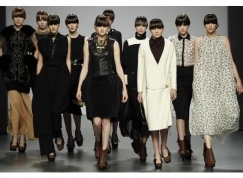 The 6,000-euro award went to the young fashion designer originally from Úbeda (Jaén) for his collection of women's wear based upon nuns' habits. Using black, brown and dull beige for tunics featuring straight and bias-cut lines in wool, Alpaca and linen mixed with gauze, tulle, muslin and silk, the range was considered the best for the 'El Ego' catwalk line-up, a section of the show featuring young, up-and-coming designers.

Madrid Fashion Week, which finished at the weekend, featured the usual suspects such as Francis Montesinos and Ágatha Ruiz de la Prada, plus the house of the late Jesús del Pozo, but was heavily marked by the recession.

Sevilla-based brothers Victorio & Lucchino concentrated on simpler and less elaborate accessories this year, and Galicia-born designer Adolfo Domínguez was conspicuous by his absence.