Who wants to be a Millionaire? 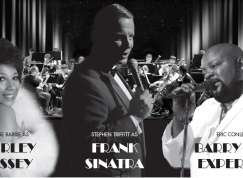 This summer will sees the first  The Millionaires’ White Summer Party in
Marbella, in conjunction with exclusive jewellers Chopard. This dusk ‘til dawn event will bring the glamour and music of Las Vegas to Marbella and is sure to become an
important annual fixture on Marbella’s social calendar.

The glamorous event will take place  Finca la Concepción, just off The Golden Mile, on Saturday July 30. Tickets purchased before the end of May, will have guests into a
fabulous prize draw.

An Evening from Las Vegas will pay homage to the glitz, glamour and incredible
music of Las Vegas in its heyday. The organisers are flying over three exceptional
musical performers, a 22 piece “Basie” style Big Band Orchestra and dancers straight
from Vegas for a night of music and excitement. The event will also be supporting
the Red Cross’ Japan Tsunami Appeal by raffling a number of fantastic prizes, including two watches from sponsor Chopard.

The amazing Maxine Barrie will open the show singing the songs of Shirley
Bassey accompanied by a full orchestra. A troupe of Vegas showgirls will then perform for the guests. Next up will be  Stephen Triffitt, who is acknowledged to be the world’s best Sinatra performer. He will be singing all the classic
songs with the backing of a 22 piece orchestra, under the stars!

The second half of the evening will be more up-tempo, with American singer Eric Conley paying homage to the late, great Barry White. He’ll be setting the mood for a party hosted by International DJ Rusty Egan, who will be playing classic Studio 54 disco track.

The evening will be MC'ed by Oscar Horacio of “Marbella Te Quiero” and
sponsored by Chopard and Veuve Clicquot. . An Argentinean Steak Grill, a Goyo
concession, Veuve Clicquot Champagne Bars and general bars will be at the event to
serve refreshments throughout the evening.

Tickets can be requested via the website www.millionairessummerparty.com for 120€
per ticket, which will include a reception cocktail by Veuve Clicquot champagne and
canapés from Goyo.

Guests purchasing tickets before the 31st May 2011 will be entered into an exclusive
prize draw to win a number of fantastic prizes. Including:
· Lunch for two at the boutique beach club Buddha Beach Puerto Banus
· A meal for two at Puerto Banus’ exciting La Sala restaurant and bar
· A free hydrothermal circuit at the Meliá La Quinta YHI Spa
· Two green fees for the stunning La Quinta Golf course, worth 92€ per person
· A weekend at hip and chic Sisu Boutique Hotel from September
· A VIP table on Friday 29th July at the exclusive and glamorous Pangea Night club
in Puerto Banus for 6 people

Visit www.millionairessummerparty.com or call 637 155 145 to buy your tickets and be entered into the draw to win these great prizes. Winners will be announced June 3 June 2011.