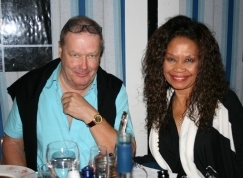 Gerry and Anita were amongst those taking part in the event Source: AMS

Some of the finest brains in Marbella took part in one of David Grainge’s now, legendary quiz nights. An amazing feat, as he has only been running it for a fortnight at Bel Mare, San Pedro’s favoured beachside watering hole.  Although in its infancy, he could now give ‘Who wants to be` a Millionaire?’ crossed with ‘University Challenge’, a serious run for their money.

The six teams with their names ranging from the ‘Naughty Nymphet’s’, ‘Beach Busters’, ‘The Brains Trust’, ‘Golden Girls’, Majyc  and the Bel Mare favoured dish ‘Liver and Onions’ Team (normally all noisy groups, as one can imagine) fell silent as the competition began.  The room rapidly heated up, as they all competed for the win.

As darkness fell, a short interlude was held, whilst the exhausted but still ebullient crowd, enjoyed the delicious Italian gourmet meal  before embarking on the final furlong.  Uncannily the victors were ‘The Livers and Onions Team’ gaining an impressive 43 points from 55.

The winning team headed up by well known Marbella personality and model Donna Jensen were awarded with a spoiling bottle of bubbly and chocolates. They followed in the footsteps of the previous weeks

Watch out for the next instalment.  It promises to be a good one!